With Year 70 Quilt Norma says, “I know the moment; I was there”.  The quilt is a seven-decade personal narrative that shows it takes a long time to become an older person with memories and experience.

Year 70 Quilt is arranged in a grid with mono printed images, each representing a memory.  In isolation the images become objects of contemplation that give meaning and value to the ordinary. The commemorative quilt will perhaps, one day, leave a trace of an existence; but for now, it provides context for Norma’s life in quiltmaking. 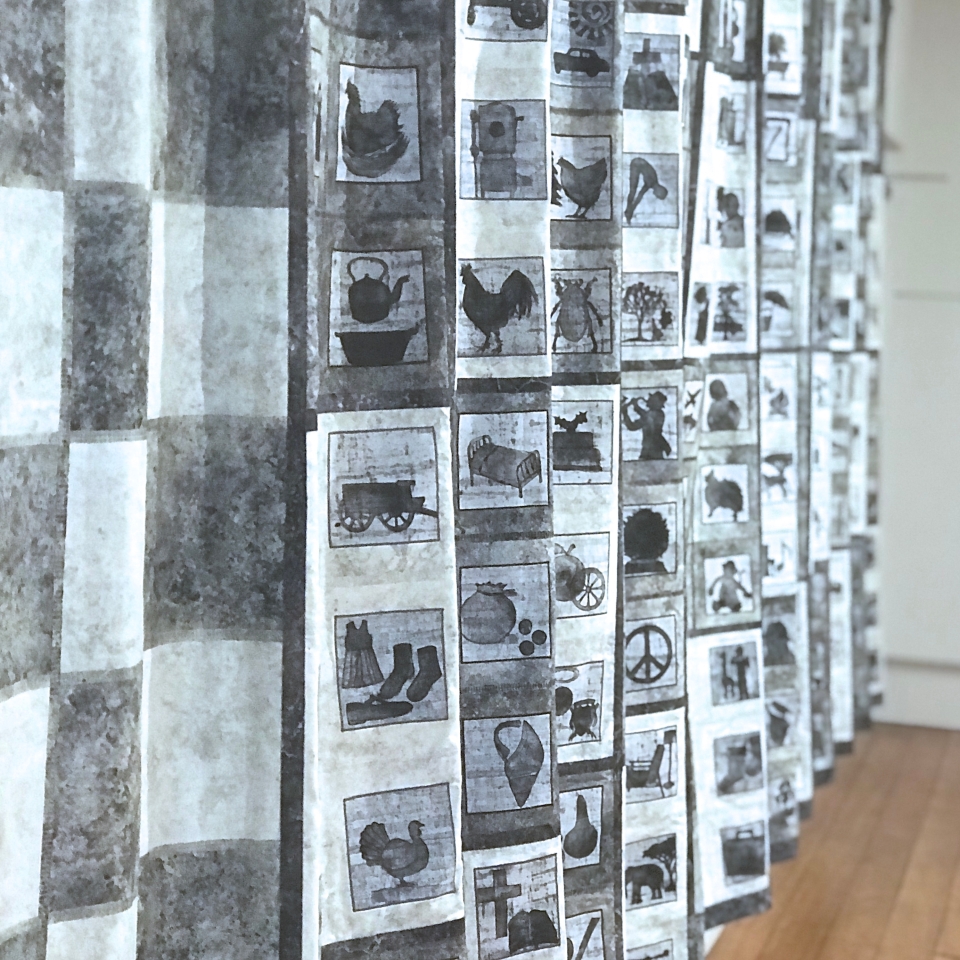 Year 70 Quilt by Norma Slabbert, in progress. The quilt is approximately 8m x 2.4m and I made it with my domestic Bernina 740 machine.

Every picture tells a story

In Year 70 Quilt, every image is a memory and tells a story. The images above tell the story of what happened to me on 11 February 1990,  the day Mr Nelson Mandela was released from jail.

The blue hat features in the piece (below)  that I  wrote.  It tells the story of what happened to me on 11 February 1990 – the day Mr Nelson Mandela was released from jail.

I WAS THERE by Norma Slabbert

I guess it was a bit like the second coming.  And I was not prepared. Not at all.  I had my idealism and faith, but no hat, no sunscreen, or water.  And that was no minor sin on a day like that, because he was so late – more than six hours, to be precise.

Six hours under the African sun can drive you crazy. But we were all a bit crazy, anyway, in the broil of that Sunday.  We waited for hours.  A shoulder-to-shoulder mass in the scorching sun; sweating, jostling, tar burning underfoot.

Thousands and thousands of us packed the Grand Parade in Cape Town to witness the coming of Nelson Mandela.  People clambered on to buildings, balconies, and rooftops.  As they scaled the statues, the gulls gave way; their wailing and squawking drowned by the hovering helicopters and the thunder of toy-toying and stamping feet.

Nelson Mandela chose the Parade, in the heart of the city, to meet the people and address the world, for the first time as a free man, after being imprisoned for 27 years for his beliefs.

Like so many leaders before him – kings, presidents, and prime ministers – he also chose the Parade, because that is where the people of Cape Town have always met to trade, debate, protest, entertain, or celebrate.  And on that summer’s day in February 1990, we were there to celebrate.  The music pulsed and we were singing and clapping and chanting his name. Growing restless in the heat.

As the temperature soared, I found refuge in the shade of an enormous blue hat; the wide brim a festive cornucopia of flowers, fruit, and ribbons.  I moved closer to the shade of the hat and smelled lavender and soap.  The woman looked down.  She was black, big, and tall; her voice strong and wise.  We exchanged names. Love and goodwill flowed freely on that day.

We talked and while we shared our mutual admiration for the woman who carried the torch for her man and the movement, a foreign television crew pushed cameras and microphones in our faces.

I didn’t get it in the euphoria of the day, but now I do.  They were looking for a story; the lone white figure in a sea of black.  The cameraman went for the blue hat, but the reporter was more interested in a black and white story.  He fired the questions:  Did we come together? Do we know each other? Does she work for me? Neighbours? Friends?

It was highly charged.  But before I could tell the reporter that I was just seeking some shade, chaos erupted.  The roof of a market stall collapsed with people screaming as they crashed down.  Windows broke and looters on the fringe of the Parade drew shotgun from police. The crowd lurched en masse, unsteadied briefly by the cracking blasts, but nobody ran.  They moved as one body, forcing their way to the front, away from the firing line.

My feet left the ground as I was caught in the python grip of the heave.  The woman with the blue hat grabbed my arm and shouted, “Take me to the station!”  Her hold was tight and she was shaking.   We pushed through the crouching crowd that surged towards us.

I was not afraid, but the anger and defiance that came over me, should have scared me.  How could they spoil a day like that?

As we reached the entrance to the Parade, a wall of pointed rifles blocked our way.  I froze, but the woman gripped my arm tighter and pushed me forward towards a parked car.   As we ducked behind the car, two black men grabbed my other arm.  The woman and I staggered as they pulled me up.  They dragged us away from the car, shouting a demand in my face, “You take us through!”

The three black people gripped my arms and pushed me forward.  We walked towards the human wall – a slow and endless walk.  But as we approached, the rifles lowered and the wall parted.  They knew it would.  I did not.  We walked to the station.

And so, I missed the coming.  Because when Madiba finally appeared on the balcony, I was not there.